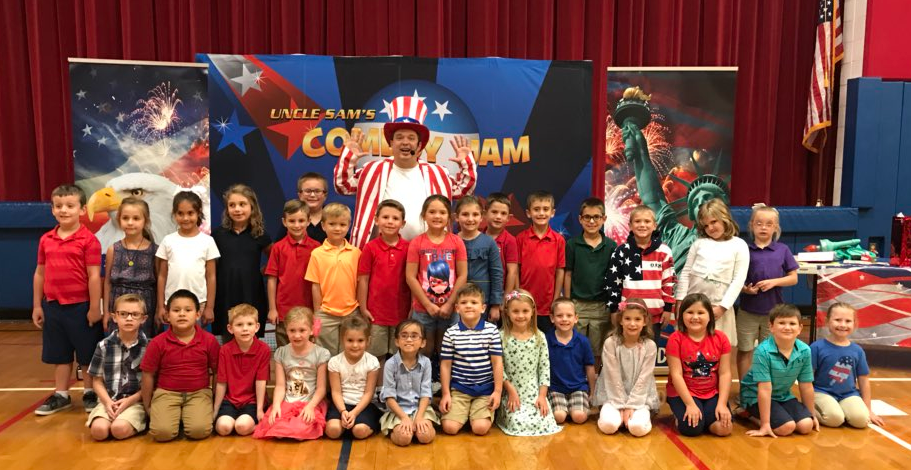 History Should Be Fun

I had the pleasure of performing my American History Assembly “Uncle Sam’s Comedy Jam” at the Martin F. Quinn Primary Center in Pittston, PA. My goal is always to make learning fun, and I know that in schools, many kids don’t enjoy learning about history. That’s why I introduced “Uncle Sam’s Comedy Jam” to my list of assemblies. I had so much with these students and we were fortunate enough to be covered in the Sunday Dispatch, a newspaper serving the Greater Pittston area. Read an excerpt below or click the provided link to read the entire article.

Thank you again to the Martin F. Quinn Primary Center for inviting me!

HUGHESTOWN — Learning about history can be boring, but a comedy act performed at the Martin F. Quinn Primary Center proved otherwise.

Students were provided with a performance called “Uncle Sam’s Comedy Jam” which told the story of how the Constitution and Bill of Rights came to be through a comedic act.

The star of the show Cris Johnson, of Niagra Falls, New York, understands that to keep young students focused on the performance you have to engage them, which was why he instilled his performance with comedy as well as calling on student volunteers.

From start to finish, Johnson had the students engrossed in the story he was trying to tell. He called on student volunteers to play roles of historical figures and act out certain scenarios while also performing magic tricks.

He believes getting the students involved in the show is another way to keep them focused on the story.

“It’s the best part of the show,” Johnson said. “Anybody can get up there and just do a speech behind a podium. I wouldn’t do what I do if I couldn’t get the kids involved. That’s the best part for me.”

Thank you to our PTO for bringing Uncle Sam’s Comedy Jam to the MFQPC! We loved learning about our country! pic.twitter.com/FsbmCLD3Ui

Give your teachers a gift and make their jobs easier by scheduling this American History assembly show for your elementary school. I promise your teachers will thank you and your students, from kindergarten through sixth grade, will have a great time…guaranteed!